I can't believe it took me so long to talk about this one. Read on: 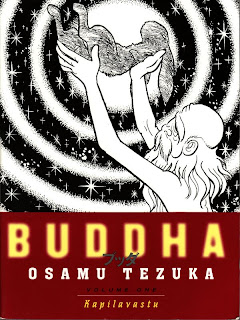 I've been meaning to read this series for quite some time now, so I was pretty excited when I finally got my hands on the initial volume of Tezuka's epic historical fantasy/biography. That's a weird way to describe a series, but, hey, Tezuka did some pretty weird comics, and this one is no exception.

The purpose of this series seems to be to tell the story of Buddha's life, but it appears, judging by the first volume, that Tezuka went in with a bigger goal in mind: to tell the history of India leading to the rise of Buddhism, and to illustrate the precepts that Buddha lived by. So that means the first volume begins well before the birth of the title character, and said birth is really only a minor subplot in the story. Instead, we focus on the exploits of a slave boy who isn't satisfied with his lot in life. He doesn't understand why being born into a certain caste makes somebody better or more worthy of privilege than others, so when he gets the chance, he insinuates himself into the good graces of an influential military officer, gets adopted as his son, and defies social order to break out of the role that birth assigned him. As can probably be expected, this doesn't work out too well for him in the end.

We are also introduced to a few other minor characters, including a young monk searching for a wise man who "has the power to become a god, or ruler of the world" and a street urchin named Tatta who has the psychic power to possess the bodies of animals. When these characters meet up with Chapra (the rebellious slave boy) and his mother, they all have some rousing adventures together (and apart), illustrating the Buddhist ideals that Tezuka is trying to describe, like the fact that life is precious, and humans are no more important than animals.

It's a rousing, fun story, with heavy emotional overtones, and it's all illustrated beautifully in Tezuka's dynamic, cartoony style. I love the wild action scenes he cooks up, like Chapra's duel with a talented archer who has an acrobatic horse: 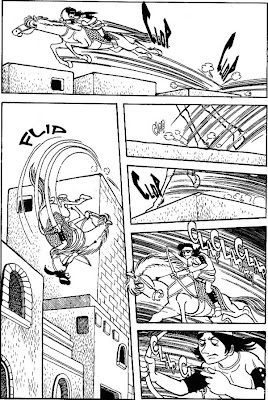 Tezuka seemed to be going for a Disney-esque style in this book, with many appearances by cute animals: 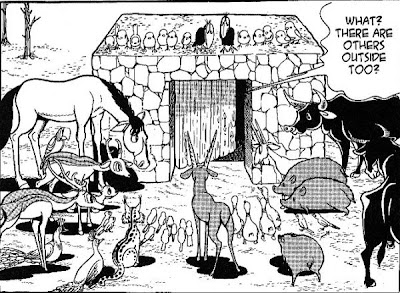 This fits the themes of the book, and provides a cheery atmosphere that is effectively harshed by the regular occurrence of human-caused violence: 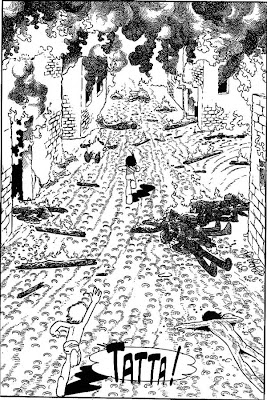 Although, it must be said that animals also cause their share of violence; it's not like Tezuka is presenting the animal kingdom as an idyllic haven from death. In fact, life, death, and sacrifice are major themes here, beginning with the opening fable of a starving monk helped out by animals, which ends with a rabbit giving itself up as food. It's an interesting message that I'll have to watch for in future volumes.

But back to the commentary on the art; another thing that detracts from the "kiddie" nature that the story sometimes seems to lean toward is the near-constant nudity. Little Tatta, being a poor member of the "pariah" caste, doesn't have any clothes, so he's always naked, and Tezuka often draws his penis. Chapra's mother, along with many of the women in the book, never wears a top, giving Tezuka plenty of opportunities to draw bare breasts. This seems odd to Puritanical Americans, but it's probably a combination of relaxed views toward sex and nudity in Japan and an attempt at historical verisimilitude. Still, it does become a notable aspect of the work.

As mentioned, the violence is often unbearably harsh, with armies laying waste to cities and wiping out characters' families, or dramatic scenes of confrontation and violence. It's heavy stuff, and to lighten the blow, Tezuka uses one of his favorite tools: the breaking of the fourth wall. He did this a lot in his comics, and while it seems to stand out in a serious work like this one, it's an effective way to keep the story from getting too depressing. When Tatta is afraid that his mother is going to be killed, he gets so frantic that he bounces off the borders of the panels and even tears through the page's surface: 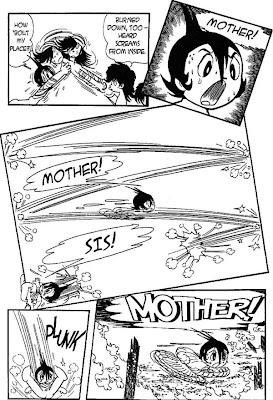 Other times, Tezuka is often very clever, like in this scene when Chapra gets so angry that he tears apart the page's panel structure: 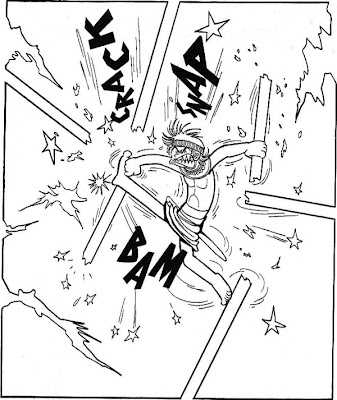 On the next page, we see him still holding the previous page's panel borders: 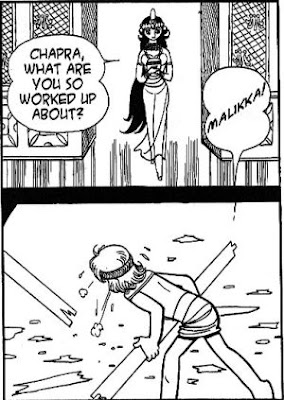 I love that sort of gag, and apparently Tezuka did too. He also makes some knowing nods toward the reader, with occasional appearances by characters from his other books, and at one point, himself:

That's a funny joke, due to the fact that Tezuka was a medical doctor before going into comics. He also uses a lot of in-jokes, and one in particular had me kind of curious, so I looked up some information about it. In other Tezuka works (including the animated Astro Boy series), I had noticed the repeated inclusion of a pig-like character, often used as a gag of some sort. Here, it shows up quite a bit, including as the brand identifying Chapra as a slave: 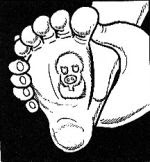 And also to pay off various gags, like Chapra angrily scattering a crowd of the goofy things: 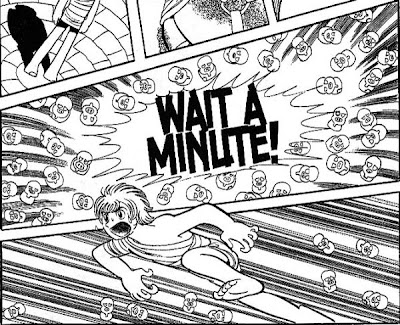 I found that the character is referred to as Hyoutan-Tsugi, and is actually supposed to be a poisoned mushroom rather than a pig. It was based on a drawing that Tezuka's sister did as a child, and he often used it as a sort of visual gag. More information can be found on this site (a great resource, with lots of information about pretty much everything Tezuka ever wrote). It's an interesting little tidbit in the work, and one of the thing that made Tezuka so unique.

This volume ends with the Buddha being born and various other characters drastically changed, some of them dead. I can't wait to see what else Tezuka did with them, along with the legions of other characters and concepts I'm sure he introduced in subsequent volumes. I won't be able to get to the next volume quickly enough.
Posted by Unknown at 5:43 PM