Honey Talks: It says, "I am tasty"

Every so often, my friend Franck De Vita sends me comics from France, which I greatly appreciate. It gives me an opportunity to get a glimpse of the vibrant European comics scene, which we don't see much of here in the United States. This one was an especially cool thing to receive in the mail: 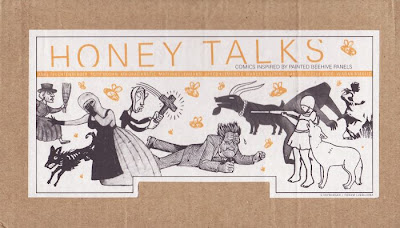 This is a neat little set of comics that comes in its own cardboard box; each story is in its own little booklet, and there is an informational booklet explaining the project. This comes from the Slovenian publisher Stripburger, and each of these comics is inspired by a unique form of Slovenian folk art, the painted beehive panel, coming mostly from the 1820s to the 1880s. As the booklet describes, farmers would have stackable beehives with a removable front panel, and these "panels were painted, so the bees could recognize their hives. Farmers soon grew tired of monotonously coloured panels and decided to decorate their apiaries with various images." Some paintings were commissioned from trained artists, but others were done by amateurs. Each of the comics here is inspired by a painting, with said painting reproduced on the back cover of the booklet. The artists are from all over Europe, and I had only heard of two of them previously: Danijel Zezelj, who sometimes does work for American publishers, with his most recent work that I know of being on the DC series Desolation Jones and Loveless; and Rutu Modan, an Israeli artist who has been getting a lot of recognition lately for her book Exit Wounds. The booklets are nicely-designed, in the scale of the original panels, and even containing a cutout that matches the bees' entrance on the originals. In a nice touch, each of the comics' title pages has images of bees, with many of them showing through the cutout slot. Let's look at each of the comics: 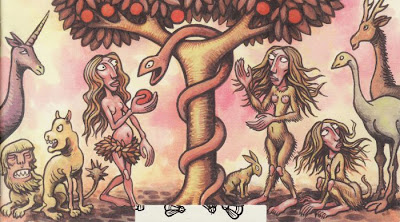 This one is pretty crazy (actually, most of them are). It's about a group of nuns, one of whom drinks fermented honey and goes into a sort of religious trance, exalting about nature. The other nuns lock her up, but then she starts displaying supernatural powers, leading to the other nuns all living in a tree and growing hair all over their bodies. The dialogue is all in Latin, with phrases like "splendor naturalis" issuing out of the nuns' mouths in scroll-like word balloons; there's a key at the back giving translations for the Latin phrases. It's pretty funny, and who knows, maybe it's supposed to be a comment on religion or something. I imagine a lot of the metaphors and references in these books went right over my head. The art is pretty nice too, with angular characters and goofy-looking animals, landscapes, and buildings. It's based on a panel that apparently depicts the Garden of Eden, with the snake offering Eve the forbidden fruit: 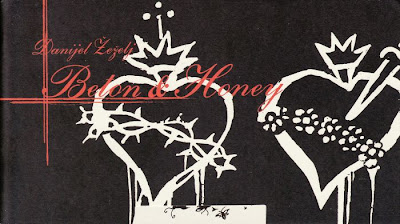 This is a short story about a man in a modern city painting a graffiti mural on a wall; it lasts less than a day before authorities paint it over, but it's beautiful while it lasts. It's a really nice use of Zezelj's moody, shadow-filled style: 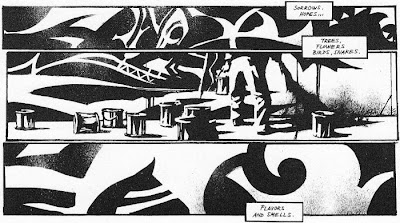 Beautiful stuff. I love the way you have to study some of the pictures before an image emerges. The basis for this one is a pair of Catholic-looking hearts, which do seem to call graffiti to mind: 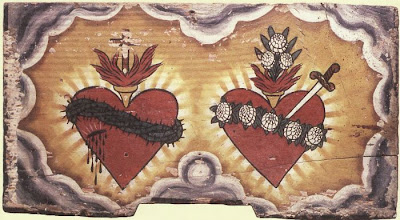 The Goat
By Koco 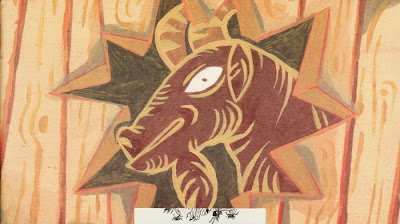 Another weird story, inspired by an equally weird drawing:

Koco takes that image literally, as if the goat contains a wormhole that allows instantaneous transportation of matter. The story is about a farmer buying a goat and finding that whatever it eats immediately comes out the other end unchanged. He takes it to a priest, thinking that it is demon-possessed, but the priest helps him find a good use for it. Strange, but pretty funny. I don't know if I like the art though; it's an example of the odd European style of art that is kind of grotesque and non-representational, ignoring perspective and anatomy: 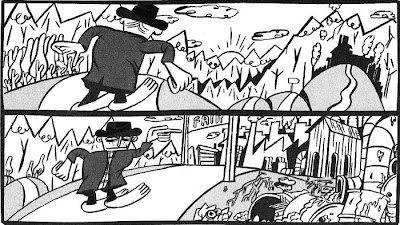 That's not a stylistic choice that many American artists make, so maybe it's a cultural barrier that leads to my difficulty accepting the style.
----- 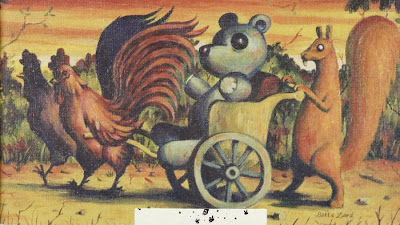 This story is based literally on the front-cover image, which is adapted from the inspiring beehive panel:

In the story, the painting has been painted by a woman named Beth, and it figures in the lives of several other characters, including a musician playing at Beth's gallery opening, the woman he loves and is stalking, and an old drunk who wanders in off the street. We also see some of Beth's childhood experiences that led to the creation of the painting, and the discovery of the painting by her grandchildren after her death. It's an interesting set of interconnected stories, illustrated in a heavily-crosshatched, cartoony style: 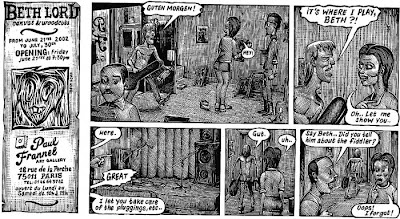 The Hunter's Daughter
By Rutu Modan 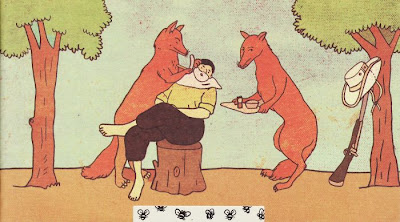 I don't know what's supposed to be going on in this story, which starts from the cover image of foxes shaving a hunter, which is a new version of the original beehive panel:

The story continues from there, with Modan seemingly improvising the tale, as the foxes kill the hunter and hold a funeral for him along with all the other animals of the forest, inviting his daughter to feast with them and telling her stories about him. It's a really weird story, and I don't really understand it. Maybe it has something to do with Jewish rituals? I dunno.
-----

The King of the Bees
By Anke Feuchtenberger 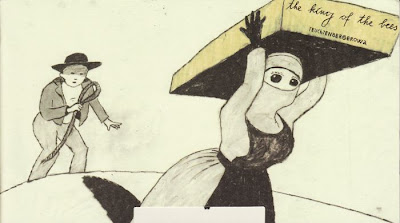 This is another weird one, imagining a surreal scenario based on the comic-strip like panel that inspires it:

That image seems to be about a woman carrying a farmer's beehive, but Feuchtenberger turns it into a story about a suicidal man using a woman who seems to be part bee to kill himself. The illustrations are nice, with each image taking up a whole page, but I really don't understand what is going on. Maybe it's over my head again.
----- 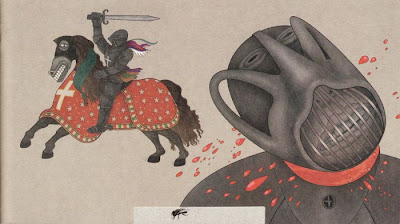 This is another really weird one (sorry if I'm getting monotonous), although it's more straightforward than some of the others. It's about a hitman and the detective tracking him, with lots of bizarre occurrences along the way; apparently, it's based on a famous Czech legend. The art is a perfect example of the grotesque European style I was talking about earlier; most women are depicted with multiple sets of breasts, and characters contort their bodies into impossible positions with no regard for anatomy, or even the shapes of recognizable human forms: 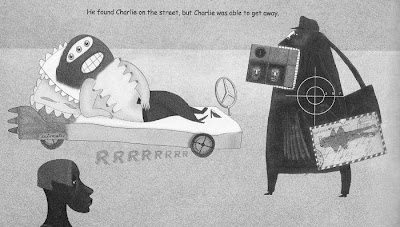 I don't get that style at all, but again, that might just be my limited American experience. The plot eventually takes the characters to a Slovenian Renaissance Faire, and they compete in a knights' tournament, leading to a version of the events depicted on the inspiring beehive:

That's a pretty fucking awesome image, and one of the few cases in which I like the original painting better than the story it inspired.
----- 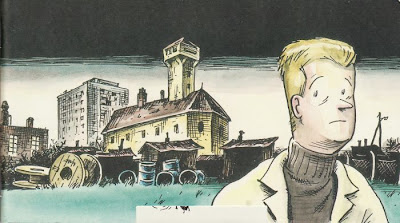 Yet another weird story, although this one is weird in a different way; it's got a strange, surreal atmosphere rather than bizarre artwork or a nonsensical plot. It's about a man stranded in a small town that might be a suburb of Ljubljana, Slovenia's capital. He got off the train, and now it seems trains don't stop at the station, and he can't get home. He wanders around the city, and it has an odd, sinister air, with men in bars playing some sort of pick-up-sticks-like game and an odd old man giving him hints about what happened to the town when the trains came. The image inspiring this story is a simple one of a train:

But it's an important one, since the arrival of trains signaled the modernization of Slovenia and the eventual end of the idyllic farming lifestyle. I'm not getting exactly what's going on here, but the story seems to be about people stranded in the modern world, somewhere between old times and modern times. Interesting stuff. I like the art style in this story too; it seems like something you would see in an American artcomix anthology. I find it much more preferable than the grotesquerie of some of the other stories.
----- 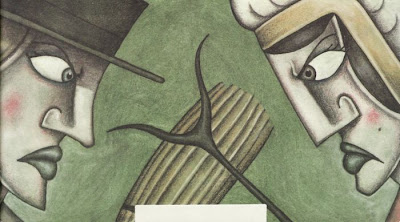 Fortunately, we end with what might be my favorite story in the bunch. It takes a weird painting of two women facing off on giant chickens while wielding unusual weapons:

And spins this into a sort of western about a bounty hunter tracking a criminal in a world with women in the positions of power and men as subservient (at one point, we see a strip club with men in thongs pole dancing). It's pretty funny, and it has a lot of fun details, like the sheriff's case of rolling pins on the jail wall. The art style is perspective-free, but I still find it pretty appealing: 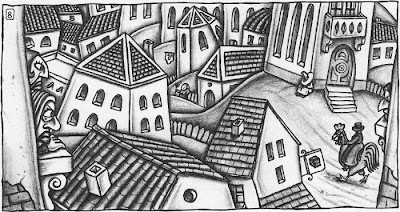 I dunno, maybe I'm fickle, or maybe this isn't so purposefully grotesque, still telling an easy-to-follow story. It leads to a fun showdown in the manner of the original picture, and ends with a silly gender-based joke. Good times.
-----

So that's the set. While I didn't like all the comics (such is the nature of an anthology), I loved the chance to read some of the European comics I don't usually see. Thanks, Franck!

(By the way, Bart Beaty reviewed this collection for The Comics Reporter last year, and he probably has more insight into a lot of this stuff than I do, so check his review out if you're curious).
Posted by Unknown at 9:01 PM