Killing Girl: This comic is killer

Damn, that was too obvious. It's apt, though! 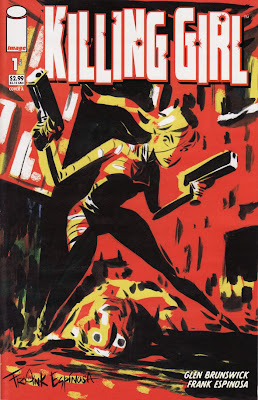 I had been looking forward to this book for a while, mostly because of Frank Espinosa's art. He's the creator of Rocketo, one of the coolest and most unique-looking comics being made today. I figured this comic would be worth picking up even if the story wasn't great, and I was right. The story certainly isn't anything to write home about, but it does its job, introducing us to its main character, Viper, an ex-prostitute and assassin for the Russian mafia. We see her at work as she uses her trained sexual manipulation to gain entrance to an office building and kill somebody who stole from the mob. At the same time, she exposits her backstory via captions, in typical noir voiceover fashion. Later, she goes on another job, and possibly encounters somebody from her past. I'm sure this will come into play in future issues, but really, the plot is kind of perfunctory; the real reason I'm reading this is for the art.

And holy cow, what a reason! Espinosa delivers on the promise of an ultraviolent, sexy tale, giving us an expressionistic mix of movement and color. I've never seen any other comics artist do what he does, layering minimal colors (usually only two or three at a time) over thick, cartoony lines. In quieter moments, he gives more definition to his characters:

But when the action starts, the lines become thicker and less-defined, providing an incredibly expressive sense of movement: 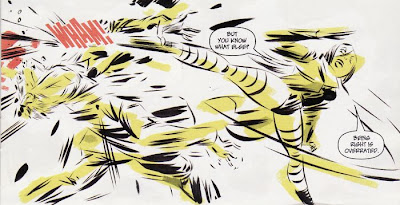 It's the kind of thing that often requires you to study the lines to discern all the action, and when it comes together, it's amazing. This particular panel blew me away, since it uses just a few lines and splotches of color, but perfectly captures the grace of Viper swinging through the air:

What the hell, I'll call it my current favorite panel, even though pretty much every panel in the issue could qualify. And the violence! The exaggerated details of people being gorily executed are rather baroque, with dabs of bright red seeming to erupt from bodies like confetti:

Beautiful stuff. I'm loving it. I'll be on board for the rest of the series, and who knows, maybe the story will start to develop into something that can keep up with the art. But even if it doesn't, it'll be one of the most visually captivating works of the year.
Posted by Unknown at 6:59 PM