De:Tales: Here are some details

This is another one that I'm finding hard to review, but true to my persevering nature, I'm going for it! 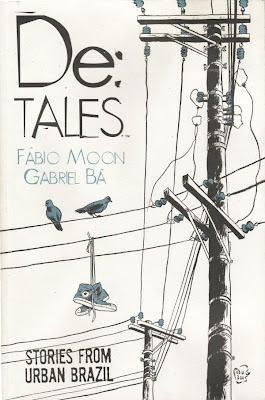 This book is a bit hard to pin down. The subtitle on the cover says "Stories from Urban Brazil", so it seems to be an attempt to capture life in São Paulo, the home town of Moon and Bá, the twin creators. But most of the stories take the form of dreams or weird supernatural stories, and they deal mostly with young people and their relationships. The real theme seems to be the lives of twentysomethings, with some beautiful depictions of urban landscapes as the backdrop. Moon and Bá trade off writing and art duties throughout the book, and while their art styles are distinguishable from each other, at times it gets easy to forget who is writing and who is illustrating. Both brothers' art styles are fantastic-looking, capturing energy and emotion in their characters (which are often based on themselves, it appears), and adding a wonderful atmosphere full of urban details like buildings, power lines, and fenced-in trees: 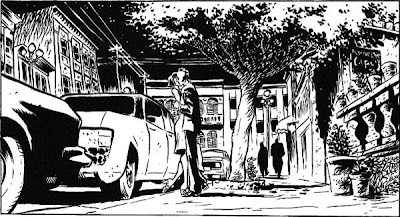 The stories are an odd mix, ranging from shared dreams about the brothers' artistic impulses, to romantic tales about finding love in the city, to simple vignettes about life. It's a good attempt at capturing the feeling of life when you're young and carefree. I think my favorite story is "Happy Birthday, My Friend!", which is about the brothers calling up the ghost of a dead friend in order to take him out for a night on the town. The supernatural element is weird, but it's probably more about trying to keep in touch with old friends that you don't see too often, and it's really very emotional and moving.

Another one that I liked is "Late for Coffee", in which a young man is approached by a pretty girl on the street who informs him that he's too late to fall in love with her. They end up wandering around the city talking for the rest of the day, and they seem to make a real connection but part ways at the end. It's got a weird feeling, like it might all be in his imagination or something. Or maybe the two are ex-lovers and are pretending to meet for the first time. Whatever the case, there's some real emotion behind it, and it's beautifully illustrated by Bá. I love this depiction of tree roots that accompanies the guy's metaphor about relationships: 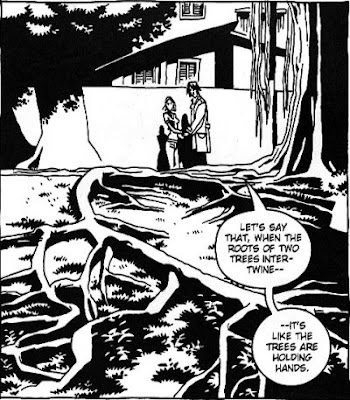 Another weird story, or pair of stories, is "Reflections". This is actually the same short story told in turn by each brother. It's about a young man (recognize a pattern here?) in a bar restroom who meets a couple other versions of himself, with each version having experienced a different outcome after meeting a girl. It's interesting to see how the brothers handle the tale, but the main difference seems to be that Bá shows the guy's penis when he's peeing. Strange.

There are several other stories, but those were my favorites, or the ones I thought were worth commenting about. The book is a great showcase for the brothers' art skills, which they have put to good use illustrating the series Casanova. I'm not sure if I would recommend it though, unless you're a fan of their art and want to see more of their work; the stories are so strange and idiosyncratic that they might put off some people. But who knows, depending on your preferences, you might like it quite a bit. I certainly did.
-----

I might actually be catching up here. We'll see if I can keep it up.