Meat Haus 7: It's a good thing I'm not vegetarian

My wife is though, so I shouldn't show this to her. 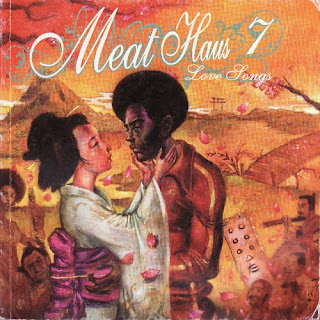 As many people will tell you, anthologies are often mixed bags, with some really good material mixed in with stuff of varying quality. That's probably why I don't buy them very often, but sometimes they're worth a look, especially if they contain work by artists I really like (in this case, Becky Cloonan, Brandon Graham, James Jean, and a few others). At worst, I get a few stories that I'll like that probably won't be published anywhere else, and at best I discover some new favorite artists. Well, this collections doesn't exactly catapult anybody to the top of my "favorite comics creators" list, but it certainly gave me a few names to watch out for in the future.

The theme of this collection (the seventh one from the Meathaus group of artists) is "love songs". The different artists interpret the theme in a variety of ways, from doing a straight adaptation of a particular song, to a story in which characters listen to a song or reflect on a song they've heard, to simple love stories. I'll go ahead and take a look at my favorites, or the ones that struck me in some way.

Jay Sacher's "A Radio Romance" is a cute little story about a couple on opposite sides of the Iron Curtain (one in the U.S., one in East Berlin) in 1969. They make contact via radio, and eventually fall in love and get married. It's pretty fun, and I like Sacher's simple art style: 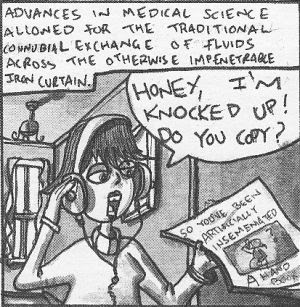 Brandon Graham's "Sugarless Candy" is a nice little urban story about a couple spending a morning together before one of them has to leave. It eschews the sci-fi trappings and sexuality of the other Graham stories I've read, instead focusing on the sweet moments the couple share. I like this panel: 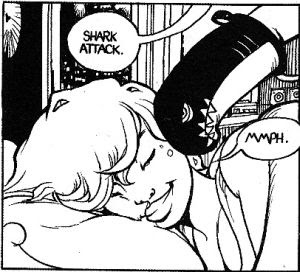 I like the art style on Dash Shaw's untitled story, but I really have no idea what's going on or what it's about: 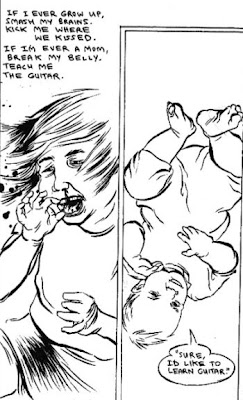 I might have to check out his book The Mother's Mouth, if I get the chance.

Pat Williams might be another one to watch out for. His story "Bar Fly" is a cute, thick-lined, wordless tale of a skull-headed guy hitting on a girl at a bar. I like it:

Zachary Flagg's "Selective Memory" is short and fairly insubstantial, but it features some really nice art, like something out of a children's picture book: 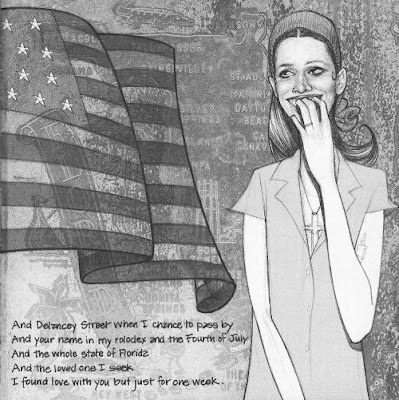 Stephen Q. Stardog's "Best Man" might be my favorite story in the book, about a guy getting drunk and bitter at a friend's wedding. I especially like the picture-filled word balloons showing his conversations with people: 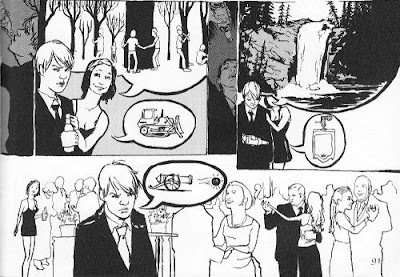 There are also some really nice-looking cigarette-smoke curlicues. He's a good artist.

I don't know what's going on in James Jean's "Tremble", but good god, the art is gorgeous: 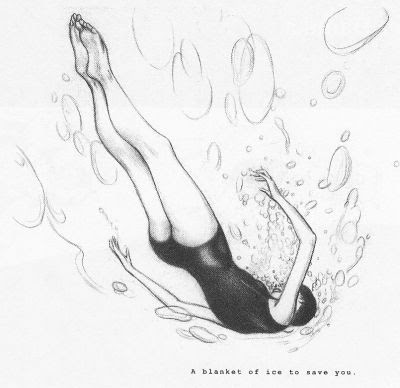 Tomer Hanuka's "I Love You" is also very nice-looking but difficult to parse. It's something about a couple brothers (I think) that talk about a dream one of them had (again, I think). I'll skip the art sample, but it's an interesting story, veering between their conversation and the dream. I like the art; I'll have to try to read Hanuka's The Placebo Man sometime.

Dave Crosland's "Cold Blows the Wind" is an adaptation of a Ween song about a woman who waits by her lover's grave, which keeps his soul from moving on. Beautiful art: 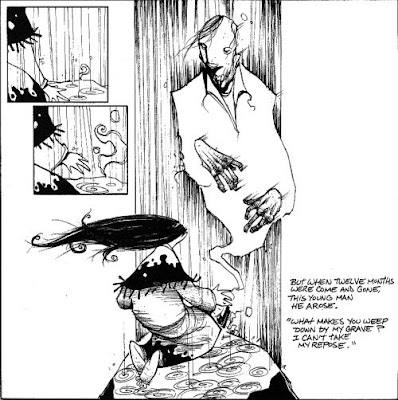 Becky Cloonan's "$7.50 An Hour" is a cute little story about her getting bored at work, falling asleep, and dreaming of a samurai who also hates his job. It veers between cartoony, manga-style art and (more) realistic pictures, like this one:

Not my favorite Cloonan comic, but it's fun.

Matthew K. Manning's "Selected Poems" is just that: three poems in comics format. They're short and sweet, with some nice illustrations: 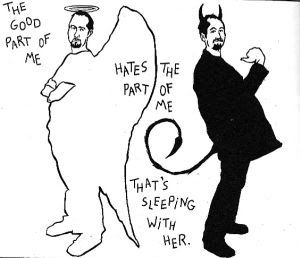 Brett Wintle's untitled story is interesting; each of its four pages has six panels that don't relate to each other, but each panel is continued sequentially by the panel in the same position on the next page. So there are really six short comics in one here. Their juxtaposition makes for an interesting atmosphere; I like it quite a bit. I'll skip an art sample though.

Finally, I think Farel Dalrymple's "Centillion" is my actual favorite story, with a narrative that shifts from an astronaut floating in space, to a guy in a bar, do a dog on the street, to a guy in a blimp, and back to the astronaut. It all seems to flow spatially, almost like the viewer is dropping out of orbit to street level. And the art is just beautiful: 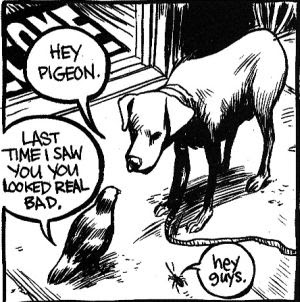 It's kind of a darkly amusing story as well. I really like Dalrymple's art; I'm going to have to look for his book Pop Gun War, and I can't wait to read the Omega the Unknown book he's doing for Marvel with Jonathan Lethem and Paul Hornschemeier.

Okay, I think that's everything that I felt like talking about. There were a few others that were all right, but nothing else that I really wanted to spotlight. It's a pretty good anthology, and I think I'm going to have to search out some of the other Meathaus books, like the recent Meat Haus 8: Head Games.
-----

And that's all for tonight. More tomorrow, even if it's just another Kirby panel.
Posted by Unknown at 10:27 PM