Eden: This world doesn't seem all that endless

Eden: It's an Endless World!, volume 1
By Hiroki Endo 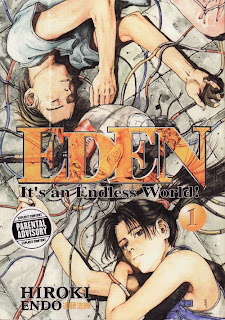 I love the kind of science fiction that gives a low-level view of huge, apocalyptic events. That was much of what I liked about movies like Signs or Steven Spielberg's War of the Worlds: rather than seeing how things played out in military headquarters or the Oval Office, we saw normal people reacting to and dealing with the mindboggling events. Hiroki Endo's Eden is kind of like that, except it goes a step further: it takes place after the apocalypse, with most of the world devastated, and its characters left to wander through the rubble, wondering what went wrong and whether humanity deserved it.

Apparently, at some point in the near future, a virus swept across the Earth, wiping out most of humanity. It had an especially creepy effect, hardening people's skin until they couldn't move, and leaving empty human-shaped shells after their insides rotted away:

At the beginning of the volume, we meet Enoah and Hannah, two children around the age of fifteen, living in and around a Biosphere 2-style facility along with their mentor Layne, a man suffering from late-stage symptoms of the disease. In flashbacks, we find that their parents were part of a group of scientists and military officers that gathered in the sterile base to escape the disease. But something went wrong, and now the three of them are the only ones left. The kids are immune, and as they get closer to adulthood, they are wondering whether to stay there or venture out into the unknown world and see if there are any other survivors.

The title of the series comes into play in the questions the characters are faced with; will they be the ones to repopulate the planet? They also discuss ideas like God, evolution, and free will (an idea that becomes poignant with the introduction of an artificially-intelligent robot named Cherubim). Eventually, their little paradise is disrupted, and they have to face these questions they've been asking themselves.

That gets us to about the halfway point of this volume, after which we take a jarring leap twenty years into the future, and join another young man as he explores the deserted landscape, accompanies by the aforementioned Cherubim. His name is Elijah, and he is revealed to be the son of Enoah (and probably Hannah, although that is not made clear). He's lonely, wishing for a girlfriend and philosophizing about the state of the world. That doesn't last too long though, as he soon stumbles into contact with others, revealing some hints about the state of the world and leaving us with a bit of a cliffhanger. It's an interesting turn for the story to take, and it's got me ready to hunt down the next volume.

The world is lovingly detailed in a sort of 1980s manga style, reminiscent of Katsuhiro Otomo's work. The landscapes are quite beautiful, especially the overgrown cities of the second half: 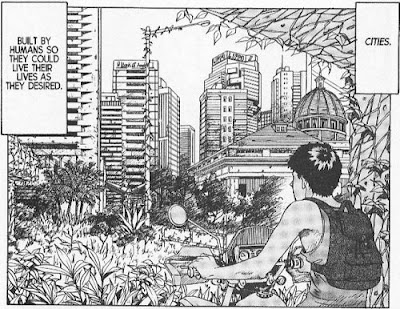 The technological details are also quite fascinating, I love the freakish-looking humans that have implanted themselves with circuitry (and I expect this aspect to play a larger role in future volumes):

Also lovingly detailed: the violence. The book has a "mature readers" rating, and that's due to the scenes of gory death, which are quite striking; man seems to never hesitate to kill other men, even when so few of them are left alive.

So it's a cool story, with nice art, violent action, and Japanese-style philosophizing about man and his place in the world. What's not to love? I've heard that the story gets bogged down in sordid stuff like prostitution and organized crime in later volumes, but I've also heard that it gets even better after that, so I think I'll try to keep reading and see for myself.
Posted by Unknown at 9:57 PM