Whiteout: Is that what happens when I get drunk?

Man, I've been meaning to read and review this for a while, so now I'm finally getting to it. 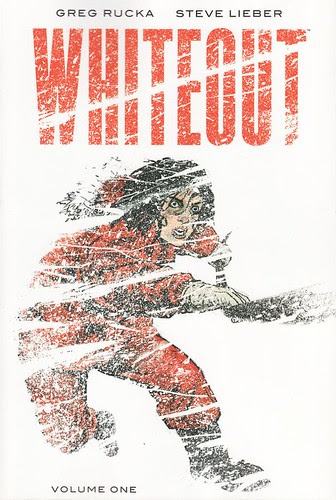 Several months ago, my friend Franck De Vita sent me a copy of this, and I've been meaning to read it but kept putting it off for some reason. Then Oni Press recently sent me a review copy of the new "Definitive" edition, so I figured I better get to it. Of the two versions, I think I like the size and feel of the new one better, but it doesn't reprint the original covers like the old one does. I also like the cover image of the new one better than the famous Frank Miller-drawn image (which is being used for the poster of the upcoming movie adaptation) on the cover of the old version.

But anyway, how did I like the comic itself? The answer is, quite a bit. It's a fast-moving, exciting murder mystery in an exotic location that one doesn't see very often in fiction, and it's full of well-drawn characters and interesting facts about Antarctica. The main character is Carrie Stetko, a disgraced U.S. Marshal who has been stuck at the south pole for a few years, and she has her hands full when trying to investigate a murder that is discovered right before the beginning of winter, when nearly everyone leaves the continent for warmer climes. It's a race to find the killer before he escapes, and it's full of action and intrigue.

It's also a nice character study of Carrie, who is a bit of a spitfire, kind of reckless and prone to impulsiveness, but also very good at her job; she doesn't take any nonsense from the opposite-sex-starved denizens of the frozen wastes. We do get to learn about the tragedy that led to her exile, and we see her suffer some tough setbacks, but she's a trooper, persevering to the end.

(By the way, Kate Beckinsale is playing Carrie in the movie, and I don't think she has the acting skills to handle it. She might be able to handle Lily Sharpe, the cold, calculating British secret agent that helps Carrie in her investigation, but I think she's out of her depth as the short-statured, fiery Stetko. We'll see if she can handle it, but I doubt it).

On the art side of things, Steve Lieber turns in an amazing job, showing all the little details of the Antarctic bases and effectively portraying the harsh, desolate look of the land: 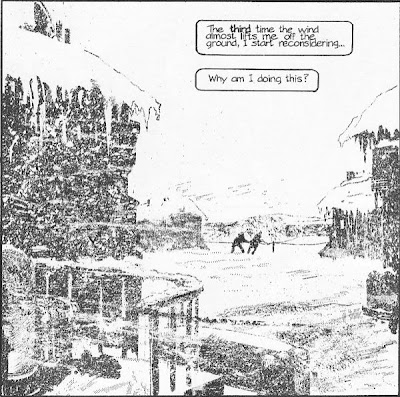 He also does an really good job with the character work, effectively demonstrating the wide range of emotions that Carrie and others go through, and delivering brutal fight scenes that feel like they hurt: 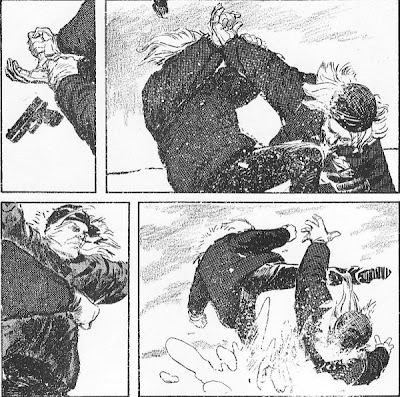 It's a really cool book, and I can't recommend it enough to those who like effective, self-contained crime stories. Now I just have to try to find the sequel, Whiteout: Melt.

Thanks to Oni Press for the review copy.
Posted by Unknown at 9:27 PM