"...Scott Free! Your telephone number is known to me!

Here it is, the final Fourth World panel, from Mister Miracle #3: 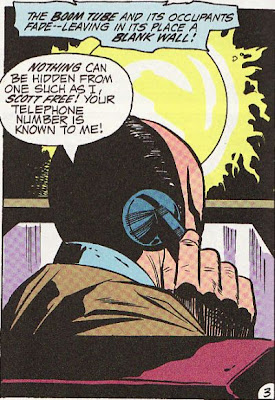 For some reason, I crack up at the menace suggested by Doctor Bedlam knowing Mister Miracle's phone number. For a scarier scene, check out Scott and Oberon's trip through the astral plane (or something like that): 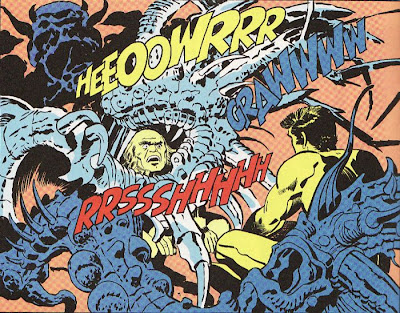 Freaky. Later, Scott faces Bedlam's scheme, which involves trapping him in a building full of people that have been dosed with "paranoia gas", turning them into "hostile, dangerous, raving, maniac[s]!" Here are the results: 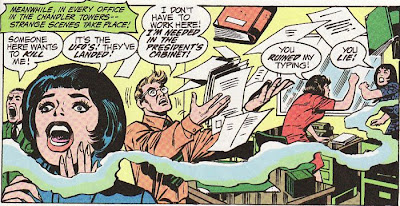 That panel is kind of funny, but I think it's pretty effective in showing the dangerous nature of the people. The guy on the left is sure that somebody wants to kill him, but he doesn't know who. The guy in the middle is throwing away his work with a vague delusion of his own importance. And the ladies on the right are coming to blows over ruined typing. It's a surreal scene, and really sets up the air of menace. Later, they attack Mister Miracle because his red suit makes them think he's a demon. This leads to this cool panel: 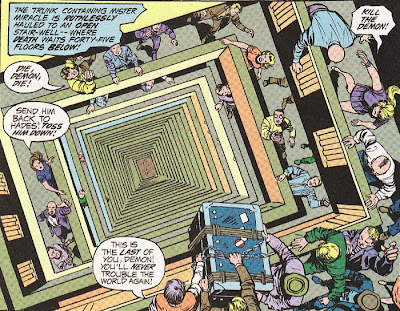 And dammit, it's another cliffhanger! That's three out of four series that end this volume of the Omnibus with the reader hanging! Of course, this doesn't seem like an especially difficult trap for Mister Miracle to escape, but still, in my mind he'll be falling down a stairwell locked in a chest for several more months. Crap.
-----

And that's the final issue in this collection, so this is the last of the regular Fourth World panels. I'll probably do one more post wrapping up my thoughts, so watch for it!
Posted by Unknown at 10:01 PM