It's like if the movie Alien were called "Earth", because that planet has a tangential relationship to the action. Or maybe not; I'm just being snarky. 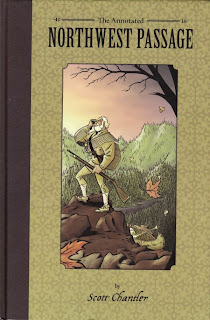 The original cover of the first of three books that were collected to form this volume had the phrase "two-fisted historical adventure", and boy, it wasn't kidding. This story of the Canadian frontier in the lead-up to the French and Indian War (or the Seven Years' War, if you're from Europe) is full of action and violence, while still telling an emotional tale with well-developed characters. In the era when the trade of beaver pelts was cause enough to go to war, England and France struggled over the territory, fighting and/or making alliances with the Indians (or Native Americans, if you want to be politically correct) and slowly exploring more and more of the untamed land. The fabled Northwest Passage that gives the book its name turned out to be nothing more than a legend, but it represented that feeling of discovery that is all but forgotten in modern times. Chantler does a great job of capturing this point in time, and he provides an easy-to-read experience through his cartoony character art.

The plot of the book concerns a struggle between Charles Lord, a fictional former explorer who now governs Fort Newcastle, an important shipping post on Hudson Bay, and Guerin Montglave, a dastardly Frenchman who plans to take over the fort and foment war. Throughout the story, we get lots of action, as Charles and his men are driven from the fort and attempt to retake it, while Charles' son Simon and his nephew Fletcher struggle as prisoners, trying to figure out their place in the world. It's all set up quite well by Chantler, who gives us hints of Lord's former heroics and Montglave's evil deeds while telling a story about fathers and sons, both genetic and symbolic.

As I mentioned above, the art is gorgeous, with lush backgrounds detailing the pristine wilderness: 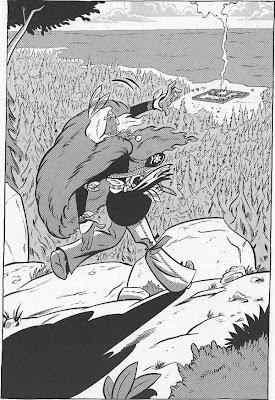 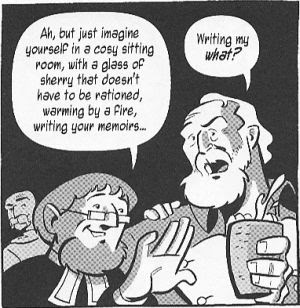 And harsh and jarring scenes of violence:

He uses a few other tricks as well, like drawing flashback's without any grey tones or panel borders, effectively separating them from scenes in the "present", or drawing the visions of an Indian shaman in a style reminiscent of Native American art, giving them an otherworldly quality: 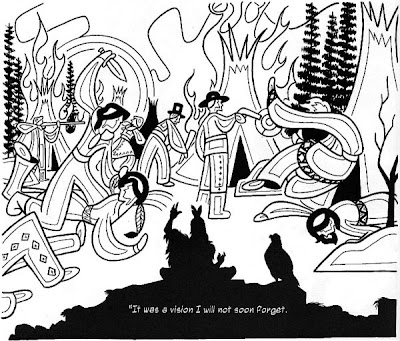 It's a really nice-looking book, and a great story.

This collected version of the story is also notable because of the annotations, which provide some fascinating background on the making of the book and the creator's thoughts on the story and art. He talks about the process of translating from script to page, references and research that his did, and the actual historical figures and locations that he alludes to in his fictional tale, among many other things. He also points out some of the artistic techniques he used to add to the story, like a scene in which two characters who are at odds never appear in the same panel, making the gutters act like a wall between them. It's something I never noticed while reading, but I still caught the feeling that he was going for, demonstrating the effectiveness of his subtle layout. There is also an amusing bit about how he rankles at the description of the book as "all-ages", when it's actually a dark, violent story. There's tons of material like this in the annotations, and it really adds to the book, especially for people like me who love that sort of thing.

The story wraps up satisfyingly at the end of the volume, but it's obviously not the end of the story. As far as I know, Chantler hasn't put out any more of the series, but he certainly plans to in the future. I'll be there, ready to read it; I can't wait to see what else he has to show us.

Wow, two reviews in one night! We'll see how long I can keep up a pace like this.
Posted by Unknown at 9:28 PM