Convention comics: One good, and one...not as good

Here are two comics I picked up at Wizard World Chicago: Well, I wanted to like this book after giving the final issue a chance, but I'm still kind of disappointed. The story gets a pat ending, with our young hero saving the day in the face of an alien threat and military incompetence. It's got some cute moments, but I'm left wondering what the point of the whole exercise was [here's where I go into SPOILER territory, and start futilely looking for symbolism]. The climax comes when young Charlie returns the trigger to the military weapon, and the aliens threaten to invade because Earth didn't destroy the alien weapons like they were supposed to. This seems to me to be an allegory for the buildup to the current Iraq war, with the U.S. certain that Iraq had weapons of mass destruction which we originally provided to them. In the story, Charlie realizes the danger and destroys the trigger; the aliens back off and the day is saved. If only the U.S. had done the same when we had the chance, everybody would have been a lot happier. There are some other overtones in the story as well, with an authoritarian military coming into town and declaring martial law, raiding houses and causing chaos, but not doing anything effective. Another symbol of the U.S. military and it's wrongheaded moves in Iraq? Really, who knows; I might be grasping for meaning in this book where there is none because I want to like it more than I do [end SPOILERS].

It's not all bad; I actually really like the art, for the most part. Some of the depictions of the adult characters are a bit rough, but the kids are nice and expressive. I also like the design of the aliens:

You can see more detail on the cover image above. It's freaky and otherworldly, almost plantlike. Cool. There are some other fun scenes, and some nifty depictions of action, but it's just not enough to outweigh the unsatisfying story.

There's also another backup story about Captain Odyssey, the boys' comics hero. It's pretty bad, and an unfortunate way to end the book. The creators seem to be going for an intentionally dumbed-down story in an attempt to emulate dumb 1950s comics, but there's none of the wit or style of those original stories, and the art seems ugly and hurried. If any more books in this series are produced, I hope they leave out these lame backups.

So it's not a terrible series overall, just kind of a mediocre one. A blurb on the inside front cover says that a 48-page follow-up special is coming, but I don't know if I'll bother getting it. The whole thing is a decent enough idea, but it's just not fleshed out enough to be satisfying. Maybe these creators will mature and produce better works in the future, but they're definitely not yet ready for the "big leagues".
-----

The Boy Who Made Silence, book one
By Joshua Hagler This book, however, is pretty damn good. It's a surreal story about a boy named Nestor who nearly drowns, only being saved by a girl who administers CPR. The accident causes him to lose his hearing, and then he starts seeing hallucinations and develops some sort of supernatural powers. At least, I think that's what happens; it gets a bit hard to follow, with a dark, gloomy atmosphere mixing collages of images with watercolored linework, and throwing in some kid-style crayon artwork for good measure. Most of the book is concerned with Nestor coming to terms with his deafness, using the classic technique of empty word balloons, but also some evocative descriptions of his sensations: 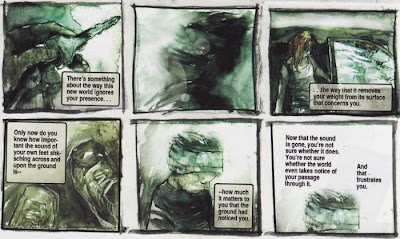 This first chapter seems to be setting up the situation; the supernatural stuff doesn't come in until the end. It seems to be mostly about the Nestor's terrible experience and his adjustment to the change. To that end, it's very effective; a dark, gritty opening chapter with a hint of weirdness to come. An afterword states that Hagler means for this to be a study of religion, but that doesn't seem to come into play here; perhaps it will be more clear in future chapters.

One slight criticism: occasionally, Hagler outlines panels with a bunch of little triangles: 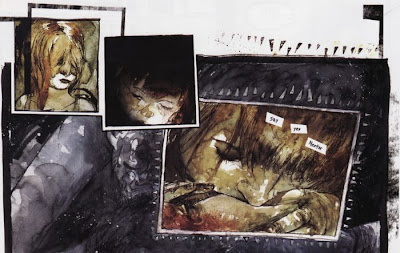 It works to highlight the panel, but this is a technique that David Mack uses regularly, and here it just seems derivative, pointing out the artist's influences. It's not a dealbreaker, but it bothered me, and I hope he moves away from it in the future.

So it's a really nice book, looking and feeling like little else out there at the moment. I highly recommend it; if your comic book shop doesn't have it, you can purchase it from Hagler's site.
-----

I'm getting behind on reviews again; family matters keep getting in the way. Maybe I'll be able to catch up a bit this weekend. Maybe not.
Posted by Unknown at 11:25 PM