Templar, Arizona: Competing with King City as a place I may or may not want to live 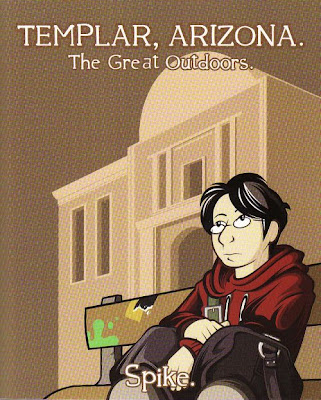 I first found out about Templar when I met its creator, Spike (a.k.a. Charlie Trotman) at an anime convention at the University of Chicago. She was very nice and friendly, and gave me an "ashcan" sampler of the comic and encouraged me to check out the online strip and email her about it. Upon reading the comic, I was quite enamored of her work; she has a nice, clean style, and a hell of a way with dialogue. I tried to check back and read more of the strip as it was published online, but I always have trouble following this type of story, which is meant to be read in large chunks, when it is published a page at a time. So when I found out that Spike was self-publishing a print version of the comic, I jumped at the chance to have a "hard" version that I could read all at once.

So was it worth waiting for? I think so. It's a bit pricey ($15 for 110 pages, and 18 of those are footnotes and sketches), but I can forgive that for a self-published book, especially if it's helping out an artist that I feel deserves wider recognition. And while it's a quick read, it's also a highly enjoyable one, with goofy characters, funny dialogue, and a rich setting that seems like it will generate some excellent stories. The series is set in the fictional town of the title (which, according to the town seal which we see on the title page, was founded in 1704), and we follow Ben, a young journalist from out of town who is working for the local paper. He's a bit of a shut-in (and apparently has a bit of a backstory that is only hinted at in this first volume), but his nosy, obnoxious neighbor Reagan won't let him stay that way; she's determined to make him go out and experience the crazy city they live in. And it certainly is an odd place, full of people like Pastimes (who dress and act like they're living in the past), Sincerists (who refuse to ever speak anything less than the whole truth), and restaurateurs who serve "morally indefensible" cuisine. And there's also lots of crazy architecture and statues: 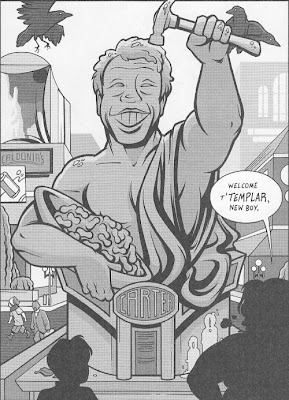 And a dry landscape that funnels plenty of toxic dust into the atmosphere.

But as fun a playground as this is to inhabit, the real joy here is spending time with Spike's characters. Reagan seems to be the real standout, sporting provocative attire coupled with a, um, Reubenesque build: 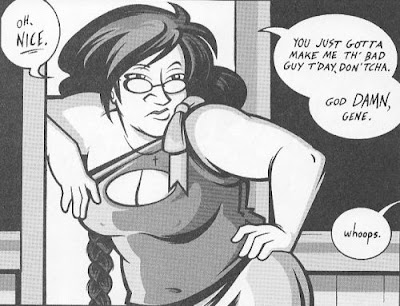 She's also profane and opinionated, and doesn't take "no" for an answer. It's hilarious to watch her drag Ben around town to show him the sights, commenting acerbically on everybody and everything they see. She's the kind of person that can be tons of fun to hang around with, but also rather annoying when you want her to leave you alone. Luckily, the latter doesn't affect the readers, and she's a riot to watch as she bulls her way through everybody else's life.

There are a few other characters of note, but most of the volume follows Ben and Reagan, introducing us to the characters and setting. We get some hints at plots that might be coming up, and some good development of the leads. I certainly can't wait to read more of them; I'll have to keep an eye on the site and see when Spike is able to release the next volume.

If you're interested in purchasing the print version of the comic (which also contains some very illuminating footnotes, in which Spike reveals a lot about her intentions and influences), you can go to the ordering page on the Templar website. Or, if you're cheap, you can read it online for free.
-----

One more review tonight? Maybe?
Posted by Unknown at 9:42 PM