Another Templar, to get everyone nice and confused

Here's another link to a webcomic called Templar, which I think was named in order to create confusion for fans of Templar, Arizona. This one is written by (in)famous comics blogger Dave Campbell, which means I'll definitely read it (gotta support the team!). I think he and artist Ken Christiansen originally hoped to have somebody publish it, but they've decided to release it online for free. It sure looks cool, and here's Campbell's description:

Templar is a five-issue comic book series full of automatic weaponry, zombies, fu, silver swords, werewolves, submarines, vampires, a demon, some blimps, and a commando assault on The Vatican. It's got everything you need in a comic, except tits. Sorry, no tits. 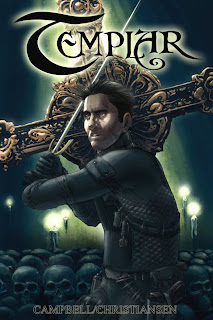