The Homeless Channel: I probably wouldn't watch it

I've never seen this book in stores, but I've heard about it a bit, and wanted to read it. Luckily, I was able to pick it up from the author at Wizard World. Score!

The Homeless Channel
By Matt Silady 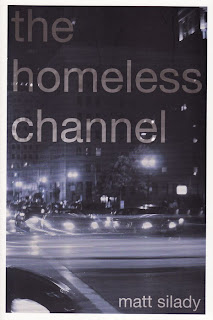 This is a pretty damn good book, especially considering that it's Matt Silady's first comic. It's an ambitious story about Darcy Shaw, a young woman that starts the titular cable TV channel, causing professional, personal, and romantic travails in her life. She's a pretty fascinating character, and at first, we're not sure if she's in it for money and fame, or for humanitarian purposes. However, we find out pretty early on that her sister is homeless, and it's obvious that she wants to help homeless people out. The book focuses somewhat on the moral and ethical conflicts, like the fact that the channel is for-profit, but it seems she's doing her best to make sure companies want to put money toward the project, money that can be used to help people.

The societal issues are only one part of the story, however. There's also a personal side, with Darcy having a romantic relationship with Grady, the "watchdog" that the corporation assigns to keep an eye on the operation. They make an interesting couple, especially since Darcy is so focused on her goals that her personal life is kind of a mess. It's fun to watch them spar professionally and still try to get along personally.

The look of the book is somewhat reminiscent of Brian Michael Bendis's earlier works, like Jinx or Goldfish, with photoreferenced characters and urban backgrounds. The dialogue is also kind of similar, with a lot of witty back-and-forths, although it's not nearly so mannered (or profane) as Bendis's. It makes for a fun read, and the pictures "act" out the conversations very well. In interviews he's given, Silady said he used this art style out of necessity, since he had trouble finding a reliable artist who didn't need to be paid up front; he decided to do the art himself, and altering photographs was what he was most comfortable with. This adds an interesting level to the work, with characters played by actual "actors", almost becoming like fumetti. Maybe this is a common discussion point with fumetti; I'm not really familiar with that branch of the medium. Whatever the case, it works really well here.

Silady actually tries some pretty ambitions stuff, and that's partly where he has some problems. There are a couple points where he has characters walking and talking, and he has the "path" of the panels zigzag across the pages (it's a double-page spread), with the top tier reading left-to-right, the middle tier reversing to read right-to-left, and the bottom tier switching back to left-to-right: 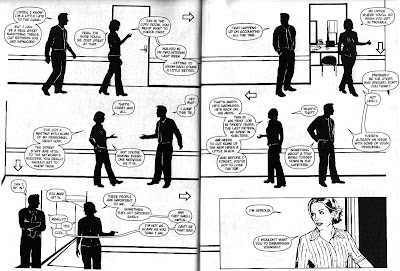 It's pretty non-intuitive, which is demonstrated by the necessity of arrows to guide the reader's eye, and while it's readable, it's not really necessary. Also it breaks the "180 rule", which states that the reader's point of view shouldn't jump across the line of action in a scene. In the second tier, the characters switch places; I'm not sure if they're supposed to be walking in the opposite direction than in the first tier, or possibly turned a corner in the hallway. It's confusing, and distracts from the conversation. I think the technique was used to "liven up" the scene and keep it from being just talking heads, but instead it just makes it harder to read.

There are also occasional issues with word balloon placement, like in the following panel: 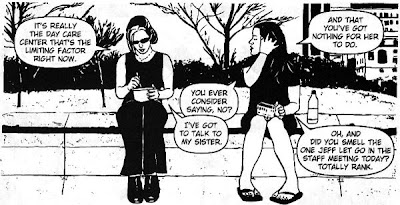 After reading the first balloon, in the upper left, the eye is drawn to the two balloons in the middle (since they are closer, but also because they are in the center of the image), but they are actually supposed to come after the balloon in the upper right. This sort of thing happens fairly regularly in the book, but that seems to be a sign of a first-time creator.

But the book is still quite readable, and I don't fault Silady for overreaching. He tells a really good story here, one meant for adults that deals with social issues and features realistic characters. He also leaves much of the story open to interpretation, with major events sometimes happening off-panel or only hinted at, forcing the reader to intuit what has happened in order to catch up with the characters. There's also a lot of humor, like when Darcy is pitching the idea of the channel, mentioning a round table discussion show with civic and religious leaders; the executives suggest putting them all in a house and making a Big Brother-like show out of it. Funny, yet quite believable.

So it's a really good book, and I heartily recommend it to those looking for good mainstream adult fiction in comics form. I'll definitely be watching Silady to see what he does next.
Posted by Unknown at 3:18 PM